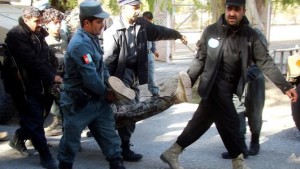 The Taliban militants have attacked a restive district in southern Afghanistan since early Monday, killing 20 security forces, said a provincial source on Tuesday.

“Several dozen militants have been clashing with security forces in outer sides of Naw Zad district center since early Monday. The attackers tried to take control over the district administrative buildings. The security forces responded to the attack. The clash left 13 policemen and seven soldiers in addition to several militants killed,” Attaullah Afghan, a provincial council member, told Xinhua.

“The clash is still going on there, if the government fail to dispatch reinforcement troops within the hours, the district may collapse to the armed militants,” the source added.

Details about the clash are still forthcoming amid the absence of the official statements.

Naw Zad and the neighboring Sangin district were the scene of heavy clashes between security forces and militants earlier this year in the province which is notorious for poppy growing.

In neighboring Kandahar province, at least one civilian was killed and one police personnel was wounded in a 12-hour-siege by gunmen in provincial capital of Kandahar city, according to sources.

The clash began late on Monday after at least two armed militants took control of a building near a private university and exchanged fire with security forces.

Earlier on Tuesday, the gun battle was resumed after security forces tried to enter the attacked building to eliminate the attackers, sources said.

The Taliban-led insurgency has been rampant since mid-April when the militant group launched a yearly offensive against the Afghan security forces.

Afghan security forces have assumed the full security charges from NATO and U.S. forces after the NATO-led troops have switched from combat to support role since January 1.