You are here: Home / Mediterranean / 2 Tunisia soldiers killed in clash with islamist militants 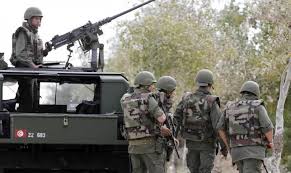 Two Tunisian soldiers were killed and four wounded in a clash with militants in a western region near the Algerian border, the defence ministry said.

Tunisia has faced an upsurge in militant violence since its 2011 revolution that has cost the lives of several dozen soldiers and police, with most attacks claimed by Al-Qaeda’s North African branch.

“During a search operation, militants hiding out on Mount Sammama opened fire on our soldiers. Two soldiers fell as martyrs and four were wounded,” ministry spokesman Belhassan Ouselati told AFP.

He said the army operation was launched after a shepherd was kidnapped on Sunday near Mount Sammama in the Kasserine region, located next to the main militant hideout of Mount Chaambi.

The Tunisian branch of Al-Qaeda in the Islamic Maghreb, the terror network’s North African arm, claimed the clash, according to the SITE Intelligence Group, which monitors jihadist Internet sites.

The Okba Ibn Nafaa Battalion also claimed the execution of spies and threatened anyone who informed on its fighters, SITE said.

The group has been behind numerous bloody attacks on Tunisia’s armed forces, including the murder of a customs official in Kasserine, near the Algerian border.

But the bloodiest attacks, for which the Daesh has claimed responsibility, killed a total of 38 foreign tourists, targeting the national Bardo museum in Tunis in March and a Sousse beach resort in June.

On Friday, Tunisian civil society groups won the Nobel Peace Prize, in a symbolic show of support following the militant attacks for the country where the Arab Spring was born four years ago.

Since the Tunisia uprising in 2011, the Arab world has been rocked by massive upheaval that has toppled leaders in Egypt, Libya and Yemen and plunged Syria into a brutal civil war.