You are here: Home / Africa / 2 soldiers killed, 5 injured in ambush on Malian convoy 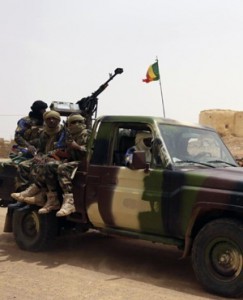 Two Malian soldiers were killed and five were injured on Sunday when their convoy was ambushed in the centre of the country, a defence official said.

The attack occurred on the road between the central towns of Nampala and Diabaly, roughly 400 kilometres by road north of the capital, Bamako, said Lt. Col. Diarran Diakite, a defence ministry adviser.

“At this time we can’t say anything about the identity of those behind this ambush, but it’s clear that they are against the peace process,” Diakite said.

Mali’s northern half fell under the control of Islamic extremists following a military coup in 2012. A French-led military intervention in 2013 scattered the extremists from the north’s cities and towns, though the region remains insecure despite the presence of U.N. peacekeepers.

In recent months, violence has extended south. In March, a masked gunman opened fire at a restaurant popular with foreigners in Bamako, killing five people.