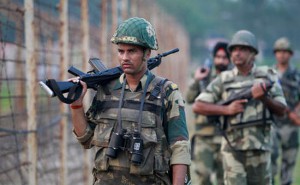 An Indian soldier in Kashmir was beheaded and two others killed by Pakistani commandos who crossed the Line of Control at Machil. Just three weeks ago, Sepoy Mandeep Singh was beheaded not far from the spot; the army has, just like then, vowed revenge. “Retribution will be heavy for this cowardly act,” the army said in a statement.

The intruders, believed to be from the Border Action Team of the Pakistan army, have allegedly escaped. In the Machil sector, Indian posts are closer to Pakistan and the rugged terrain and thicker forests gives infiltrators an advantage.

Last month, terrorists mutilated the body of 27-year-old Mandeep Singh before running back into Pakistan Occupied Kashmir, under cover fire provided by the Pakistan army.
The army said the incident reflected barbarism in official and unofficial organisations in Pakistan and asserted, “the incident will be responded to appropriately.”

Seventeen soldiers have died in firing from Pakistan in less than a month. There has been a spurt in ceasefire violations since the September surgical strikes, when Indian soldiers crossed over the Line of Control and destroyed staging areas for terrorists who were getting ready to enter India to carry out a series of attacks.

The strikes were seen as India’s response to the Uri attack in which 19 soldiers were killed by terrorists from Pakistan.