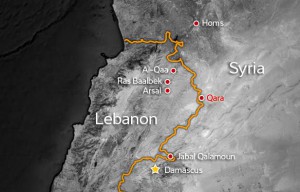 Hezbollah and Syrian army troops engaged in fresh clashes Monday with jihadi militants over a strategic hill in the Qalamoun region, Hezbollah-owned Al-Manar said, adding that two Nusra leaders died in the fighting.

The report said that Al-Barouh hill, located on the outskirts of Ras al-Maara, witnessed fierce clashes in which Nusra commander Abu al-Shweikh and another field commander were killed.

A number of reports said Hezbollah and the Syrian army have been steadily advancing in the battle and are close to establishing control over the hill.

Control of the hill would allow the forces to have greater access to the nearby areas were jihadis are operating.

The two sides have been engaged in deadly battles in Syria’s Qalamoun region, which straddles Lebanon’s eastern border, since last week. Hezbollah and the Syrian army have scored important gains in the fighting, driving militants from several towns, including Assal al-Ward and Al-Juba, and about a dozen posts.

At least three Hezbollah fighters and dozens of jihadis have been killed since last week’s clashes erupted.