You are here: Home / Europe / 2 men on trial in Germany accused of joining Islamic State 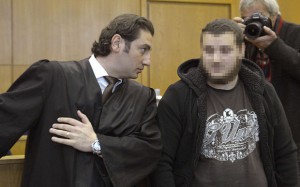 A German court began hearing the case against two men accused of joining the Islamic State group, with one of the defendants saying before the trial that he would reveal details about the inner workings of the organization.

Ebrahim H.B. told public broadcaster NDR that the extremist group gives new recruits a choice of fighting on the front line, or becoming suicide bombers. Anyone suspected of being a traitor is executed, he said.

“I feel the need to explain a lot of things,” he said in the interview broadcast last month. “So that the world knows the truth.”

The 26-year-old and another German-Tunisian man, 27-year-old Ayoub B., are charged with membership in a terror organization.

The men, whose surnames weren’t released due to German privacy rules, allegedly traveled to Syria in May 2014 to join IS. They returned to Germany in August and September 2014.

Prosecutors say Ebrahim H.B. was part of an IS unit sent to carry out a suicide attack in the Iraqi capital Baghdad, but the attempt was aborted after some of them were arrested.

Ayoub B. is also accused of taking part in combat for IS. His lawyer told the court on Monday that his client had only wanted to travel to Syria to study Islam, not to fight.

Tight security was put in place for the trial at the regional court in the northern city of Celle, with the two defendants seated behind protective glass.

More than 700 people have traveled from Germany to Syria and Iraq in recent years to join extremist Islamic groups such as IS. About 20 have come from the city of Wolfsburg, some 50 kilometers (31 miles) southeast of Celle, including the two men now on trial.