You are here: Home / Mediterranean / 2-day Libyan political dialogue ends, accord within 3 weeks 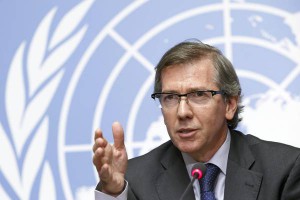 The latest round of the Libyan Political Dialogue has ended after two days of talks at the United Nations Office at Geneva with an aim to reach an agreement by the beginning of September. The announcement was made by the United Nations Support Mission in Libya (UNSMIL).

”The parties underscored their determination to conclude the dialogue process as soon as possible, with a target date within the coming three weeks,” reports the UNSMIL statement.

”Finalisation of the dialogue process would pave the way towards final adoption by the parties of the Libyan Political Agreement, to be followed by its formal endorsement at the beginning of September.” Special Representative of the Secretary-General for Libya and UNSMIL chief Bernardino Leon was said to have explained to the parties how debate on the annexes to the ‘Political Accord (signed in July by the Tobruk-based government and some Libyan factions) on the formation of a national unity government. The UN report shows that the problem of the opposition between the Islamist militias supporting the Tripoli government and the Tobruk armed forces under General Khalifa Haftar remains.

”The parties noted the need for urgent progress on the security track of the dialogue process, in parallel to the progress being made on the political front. In this regard, the different political leaderships present at the talks signalled that they would move to encourage relevant security actors to commence consultations with the United Nations Support Mission in Libya and provide their inputs on ways of operationalizing the security arrangements outlined in the Libyan Political Agreement,” reports the statement.