You are here: Home / MidEastGulf / 2 americans killed at Police Training Center in Jordan 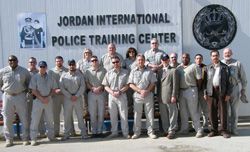 Two Americans were shot dead Monday at a police training center in Jordan, according to U.S. defense officials and a Jordanian security source.

A Jordanian security source told NBC News that several people also were injured in the incident, which took place in a cafeteria. The shooter was killed, the source added.

The U.S. Embassy in Jordan told NBC News it had received reports about a “security incident” at the Jordanian International Police Training Center and was in contact with local authorities.

The U.S.-funded training center was established as a facility to train Iraqi police.