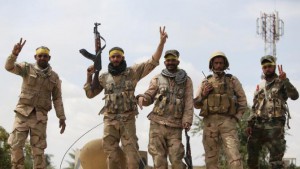 The security forces and fighters of “al-Salam Brigades” affiliated to the Popular Mobilization Units (PMU) killed and wounded 19 terrorists in clashes west of Baghdad south of Tikrit city, the center of Salahuddin province.

Baghdad Operations Command said in a statement, that the first Brigade managed during a clash with a terrorist group to kill three terrorists, wounded four others, and destroyed a vehicle in al-Thar Thar area, western Baghdad.

For his part, a source in Salahuddin local government said in a statement to Shafaq News, that large numbers of elements of ISIS terrorist organization have raised the flags of surrender in Isehaqi island as a result of strikes and siege imposed by al-Salam Brigades.

The Iraqi Ministry of Defense, announced earlier today, that ISIS terrorist organization withdrew from areas in Salahuddin province with the start of Liberation operations of the province by the security forces, fighters of PMU and clans