You are here: Home / West Asia / 19 militants killed in Afghan and US forces operation in Helmand 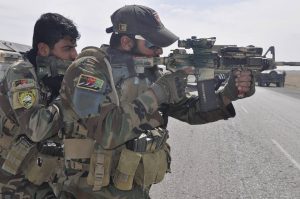 At least nineteen militants were killed during the operations conducted by the Afghan and US forces in southern Helmand province of Afghanistan, like reported by khaama.com.

According to the local officials, the operations were conducted in Marjah and Nahr-e-Saraj disricts of Helmand in the past 24 hours.

The statement further added that a PKM machine gun, a rocket launcher, and four Ak-47 assault rifles were also confiscated during the operations.

In the meantime, the US military carried out airstrikes on Taliban hideouts in Sangin, Marjah, and Nahr-e-Saraj districts, the statement said.

According to the provincial government, at least fifteen militants were killed and another insurgent was wounded during the airstrikes.

The anti-government armed militant and terrorist groups including Taliban insurgents have not commented regarding the report so far.

This comes as counter-terrorism operations are underway in various provinces of the country as the anti-government armed militant groups are attempting to expand their insurgency activities in some of the key provinces including Helmand in the South.