You are here: Home / Africa / 19 civilians killed in hotel attack in Somalia’s capital 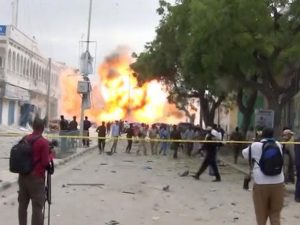 At least 19 civilians were killed when Islamist attackers launched a car bomb and gun attack on a busy hotel and an adjacent restaurant in the Somali capital Mogadishu, a police officer said on Thursday.

Abdi Bashir told Reuters the Somali security forces took control of the restaurant at midnight after the gunmen held hostages inside for several hours. Five of the gunmen were killed, Bashir added.