You are here: Home / Senza categoria / 1,800 U.S soldiers to deploy to Afghanistan, Iraq 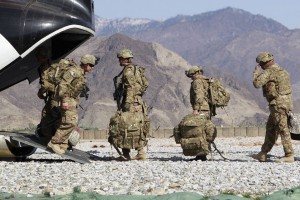 The United States Army announced Friday that 1,800 soldiers from two stateside installations would deploy in the coming months to Iraq and Afghanistan.

In Afghanistan, 2-87 Infantry will join the 10th Mountain Division headquarters, which is serving at Bagram Air Field as the National Support Element.

“Our nation’s Army continues to call upon Mountain soldiers to serve around the world in places such as Afghanistan due to their proven record of high standards, mission success and selfless service,” said Maj. Gen. Jeffrey L. Bannister, commander of the 10th Mountain Division.

There are about 9,800 U.S. troops serving in Afghanistan primarily to train and advise Afghan forces and conduct some counterterrorism operations. President Barack Obama announced in October he would keep 5,500 troops in Afghanistan into 2017, but some members of Congress have called for a larger U.S. presence amid recent gains by the resurgent Taliban.

The top American commander in Afghanistan, Army Gen. John Campbell, recently said the United States should at least maintain its current posture there for the foreseeable future.

“My intent would be to keep as much as I could for as long as I could,” he said.

In Iraq, the soldiers will be tasked with advising and assisting Iraqi security forces as they prepare to fight Daesh.

There are about 3,500 U.S. troops deployed to Iraq, serving primarily as advisers to Iraqi forces.