You are here: Home / Senza categoria / Hezbollah says it is fighting IS also in Iraq 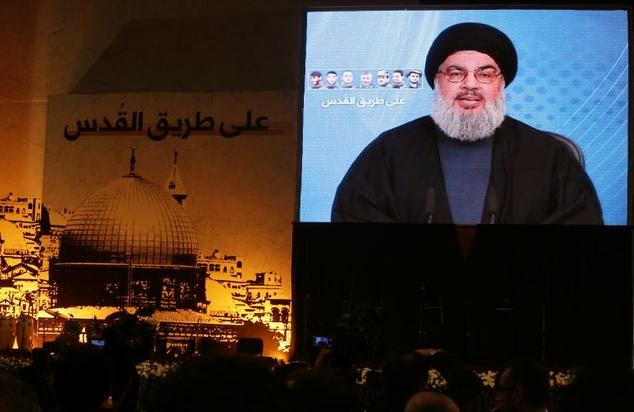 Lebanon’s Shiite movement Hezbollah is fighting the Islamic State group in Iraq, its chief Hassan Nasrallah revealed for the first time Monday in a speech beamed to supporters.

“We may not have spoken about Iraq before, but we have a limited presence because of the sensitive phase that Iraq is going through,” Nasrallah said, referring to ongoing clashes between Iraq’s army, militias and Kurdish forces against the IS jihadists.

“I say to those who call on us to withdraw from Syria, let’s go together to Syria,” said Nasrallah.

“I say, come with us to Iraq, and to any place where we can fight this threat that is threatening our (Muslim) nation and our region,” he added, referring to IS and the Al-Qaeda affiliated Al-Nusra Front.

Both Sunni jihadist movements control large swathes of Syria, while IS is also present in Libya, where on Monday it claimed the beheading of 21 Coptic Christian Egyptian hostages.

Nasrallah condemned the brutal killings as “an awful, heinous crime”, while branding the Al-Nusra Front and IS as having “the same essence, ideology, culture and methodology”.

“The only difference between them was over leadership, but they are essentially one and the same,” said Nasrallah.

“All the takfiri (extremist Sunni) currents must be fought, without distinction.”

Nasrallah’s speech comes just over a week after Hezbollah, the Syrian army and pro-regime militias launched a major offensive against rebels and their Al-Nusra Front allies in southern Syria.

Nasrallah meanwhile said it made no sense for unnamed Gulf countries — in an apparent reference to Saudi Arabia and Qatar — as well as Jordan to fight IS, while allegedly supporting the Al-Nusra Front.

Hezbollah, like Assad’s regime, brands all those fighting Damascus as “terrorists”. Neither recognises the presence of non-jihadist groups seeking Assad’s ouster.

“How can some countries in the Gulf take part in the (US-led) international coalition against Daesh, while giving money and weapons to the Al-Nusra Front… How is that logical?” he said, using the pejorative Arabic acronym “Daesh” to refer to IS.

In August, a US-led coalition launched strikes against IS positions in Iraq. In September, the campaign was expanded to include targets in Syria.

Nasrallah went on to call on Gulf states that support the Syrian opposition to help pave the way for a political solution to a conflict that has claimed more than 210,000 lives since 2011.

“In Syria, the game is over,” said Nasrallah, in reference to the ongoing fighting.

“The gates to a political solution should be opened,” he said, “and the non-extremist opposition… must enter into a settlement with the regime, because the regime is ready for a settlement.”

Nasrallah also warned that “the region is going in the direction of more crises, more confrontations, and new fronts are opening”.