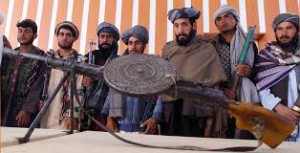 Some 18 members of Taliban militant group have renounced violence and surrendered in Afghanistan’s northern province of Badakhshan, an army source said on Tuesday.

Among the surrendered was a local commander of Taliban named Qari Mehrab and the former insurgents also handed over 13 rounds of weapons to military authorities, the source added.

With the insurgents’ surrender, peace and stability would be further strengthened in several parts of the province, 315 km northeast of Afghan capital of Kabul, Karimi noted.

More than 10,000 Taliban militants have laid down arms and joined the government-backed peace and reconciliation process since mid-2010 when the government launched the initiative, according to officials, but the claim has been rejected by the armed outfit as “baseless.”