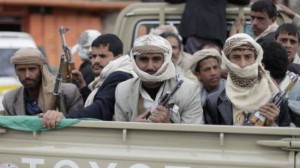 At least 18 Saudi soldiers were killed in an attack by Shia Houthi group on a Saudi military site near the border with Yemen, a pro-Houthi television channel reported on Thursday.

Al-Massira television channel reported that Houthi militants and allied tribesmen have attacked a Saudi military site adjacent to the outskirts of the northern Saada province, which is considered the Houthis’ stronghold in Yemen.

The broadcaster did not, however, report the time of the attack, on which the Saudi-led military coalition currently conducting an anti-Houthi air campaign in Yemen has yet to respond.

The channel said that the Houthis destroyed a number of military equipment belonging to the Saudi army and launched rockets at a number of other military sites straddling the border with Saada.

Houthis and the Saudi-led coalition have exchanged accusations of breaching a five-day “humanitarian truce” which ended on Sunday evening.

Fractious Yemen has remained in turmoil since last September, when the Houthis overran capital Sanaa, from which they have sought to extend their influence to other parts of the country.

Riyadh says its campaign comes in response to appeals by embattled President Abd Rabbuh Mansour Hadi for military intervention against the Houthis.

The Houthis, for their part, denounce the offensive as unwarranted “Saudi-American aggression” against Yemen.