You are here: Home / MidEastGulf / 18 ISIS elements killed in aerial bombardment in center of Mosul 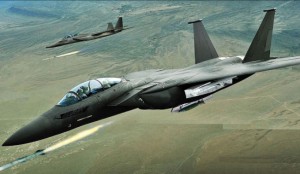 The Kurdistan Democratic Party announced that 18 fighters of the so-called the Islamic state in Iraq and Syria (ISIS) were killed in an aerial bombardment carried out by the international coalition aviation backed by the Peshmerga forces in the center of Mosul city in Nineveh Province (405 km north of Baghdad).

The Kurdistan Democratic Party’s Spokesman in Mosul Saeed Mamouzini said in a statement received by IraqiNews.com, “Today, international coalition aviation carried out air strikes on ISIS headquarters in the neighborhoods of al-Quds, Kokgli and al-Karama in the center of Mosul, killing ten ISIS fighters.”

Mamousini added, “A force from the Peshmerga forces bombed a gathering of ISIS fighters in Bashiqa area (17 km north of Mosul) with artillery, killing eight fighters of the ISIS.”