You are here: Home / West Asia / Russia to cooperate with Afghanistan in war on terror 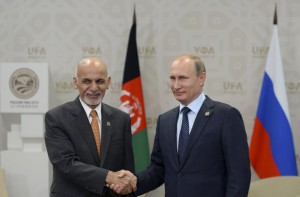 Russian officials have recently committed to cooperate with Afghanistan in war on terror, because maintaining security in this country guarantees regional in particular Central Asian countries.

Fazel Hadi Muslimyar, senate (Meshrano Jirga) chairman after his return from Russia told media that Russian officials have stressed that their country would never step up against Daesh in Afghanistan without informing the Afghan officials. Russian authorities have pledged direct cooperation with Afghanistan in war on terror, adding Russia is about to deliver 10,000 Kalashnikovs (AK47) to Afghan forces in upcoming days, Muslimyar further said. During the trip to Russia, Afghan delegation have asked the country’s officials to never support other non-government individuals or groups in fighting terrorism particularly Daesh terrorist group, because it can harm both sides, Muslimyar added.

Likewise, the delegation asked the Russian government to equip the Afghan security forces with a few choppers in fighting terrorism, Muslimyar continued.

Russian officials in a meeting with Afghan security advisor have already promised to cooperate with Afghanistan in fighting terrorism. On regional countries’ role in fighting terrorism, a number of experts said that Moscow was concerned on terrorists’ infiltration in its borders. So, if the regional countries to honestly cooperate with Afghanistan, peace and stability would be soon prevailed throughout the country. An expert on regional affairs, Akram Andishmand said, ‘To prevent terrorist groups’ influence their soils, great powers of the region including Russia should help the Afghan government in the respect’.

Another expert, Salih Mohammad believe that currently, the Afghan security forces are faced with international terrorism and the great powers of the region in particular Russia should honestly cooperate with Afghanistan, because this is a regional war and is not only depended to Afghanistan, therefore, worldwide cooperation is needed.

Meanwhile, praising the Afghan security forces efforts in ensuring security in northern provinces, a number of our countrymen have stressed that the government should not let the terrorists to influence the north and should seriously step up in this regard. A Kabul citizen, Omran said, ‘Afghanistan is among those countries that have been always given victimized, but the regional countries particularly Moscow should be beside Afghanistan, because ensuring peace and stability in Afghanistan links to peace and stability in the region and the world’.

This is while that many countries have already announced their support to Afghanistan in fighting terrorism, but unfortunately, restoring peace and stability that are the Afghan people old dreams have not been fulfilled yet. Now, it is expected that by regional countries efforts, one day long-lasting stability is maintained in Afghanistan.