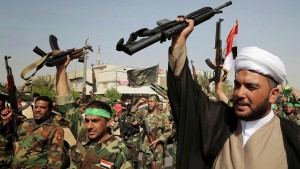 Shiite prayers billow from a mosque loudspeaker at a sprawling Iraqi military base on the fringes of the northern oil-rich city of Kirkuk as Shiite militiamen, most of them in mismatched military fatigues, shuttle back and forth to nearby front-lines, eager for a taste of victory against the Islamic State group.

When the IS militants blitzed across northern and western Iraq last year, tens of thousands of Shiite men answered a call-to-arms by the country’s top Shiite cleric, Grand Ayatollah Ali al-Sistani, to defend the nation against the Sunni extremists.

Now the Shiite militiamen have arrived in Kirkuk, long one of Iraq’s most hotly disputed territories, and have made a string of bases just 10 kilometers (six miles) from the city their home. A marriage of convenience has since emerged with Iraq’s strained Kurdish forces, which had been exclusively in charge of the city since last year when they repelled IS advances.

As they face a common enemy, the unexpected and often uncomfortable alliance between the Kurdish and Shiite rivals is on display. The friction is feeding the combustible inter-ethnic competition over who will ultimately get control of the city.

The Shiite fighters, officially known as the Popular Mobilization Forces, were instrumental in helping the Iraqi military — which dissolved in the face of the militants’ initial onslaught in northern Iraq — stall the IS push outside Baghdad. They have also teamed up with Kurdish peshmerga fighters in a number of battles, breaking the siege of the northern Shiite-majority town of Amirli in August, and recently, driving Islamic State militants out of a string of towns in Diyala province, northeast of the Iraqi capital.

But their arrival in Kirkuk, 290 kilometers (180 miles) north of Baghdad, has provoked deep-rooted sensitivities. Kurdish forces claimed control of Kirkuk just days after the Islamic State group swept across northern Iraq, seizing major cities, including Mosul and Tikrit. Kirkuk, located along the fluid line that separates Kurdish northern Iraq from the rest of the country, is home to Arabs, Kurds and Turkmen, and all have competing claims to the area. The Kurds have long wanted to incorporate the city into their semi-autonomous region, but Arabs and Turkmen oppose this.

The Kurdish troops held their ground, but the IS attempted a comeback. With what the Kurds say was assistance from a Sunni sleeper cell in the city, Islamic State extremists stormed an abandoned Kirkuk hotel last month, then staged a surprise attack on a Kurdish peshmerga outpost, killing a top commander and several of his troops.

The apparently coordinated attack was a blow to the Kurds and underscored their tenuous hold on the city, while the semi-autonomous Kurdish government appealed for more weapons and training from the U.S.-led coalition forces.

Since then, thousands of fighters from a handful of militias such as the powerful Iran-backed Badr Brigades, have flooded into Kirkuk and the surrounding Tamim province.

Kirkuk Governor Najmaldin Karim welcomed the Shiite forces but Massoud Barzani , the president of the Kurdish regional government, insisted that the Shiite militiamen would be “prohibited under any circumstances” from entering the city.

“We are already in Kirkuk,” Mullah Mohammed Yousseff, a Badr Brigades spokesman, roared with laughter as he sat behind his desk inside a trailer at the Taza Batallion base during a recent visit by The Associated Press.

“We have to fight,” Yousseff added. “Our religion legitimizes it.”

The Badr Brigades commander, Hadi al-Amiri, came to Kirkuk last week to deliver truckloads of weapons to Shiite fighters and vowed during a meeting with senior Kurdish officials to send thousands more from his militia to reinforce the area — much to the Kurds’ consternation. At least 2,000 fighters have arrived at the Taza base alone since al-Amiri’s visit. Several militia commanders in Kirkuk estimate that as many as 5,000 Shiite fighters arrived in the region this month alone.

“I’m here because … al-Sistani called on us to protect our country,” said 24-year-old Shiite fighter Amir al-Qassim, who came to Kirkuk from his native Baghdad in January.

A former minister in the Kurdish regional government, Jafar Moustafa, insisted that the reports of Shiite militia presence in Kirkuk are “far from reality,” and that the governorate is firmly in the hands of the Kurdish peshmerga forces.

But only a few kilometers (miles) away from where Moustafa spoke to the AP, religious Shiite flags mark the battlefield, while billboards with al-Amiri’s picture and that of radical Shiite cleric Muqtada al-Sadr are hoisted alongside Shiite outposts just south of the city.

“Run Daesh, run, by the orders of al-Sistani,” chanted a group of Shiite fighters after a recent clash, firing their Kalashnikov rifles into the air in celebration. Daesh is an Arabic acronym for the Islamic State group.
Less than 50 meters (yards) away, Kurdish fighters stood guard along the same front line. They did not engage with the Shiite militiamen and refused to be interviewed.

Sunnis living in Kirkuk also have much at stake, and many are viewed with suspicion, deemed guilty by association — simply for being Sunni like the IS militants. The Shiite militias have been repeatedly accused of severe brutality against Sunni communities as they push IS back.

A report released Sunday by Human Rights Watch accuses the Shiite fighters of forcing Sunni residents from their homes, kidnappings, and in some cases, executions.

Such sectarian fears hang over the streets of Kirkuk, and at the outdoor bazaar in the heart of the city, many echoed concerns over the Shiite militias’ brutal record.

“They act like gangsters and we are afraid of that,” said Yassin Ahmed, 24, a Sunni resident of Kirkuk. “But the most important thing is that they have to take care of the people and provide us with security.”
For many of the city’s Kurds, Kirkuk can only be Kurdish.

“Kirkuk is a Kurdish area,” said 48-year-old Ali Karim. “Only the peshmerga must be in control.”