You are here: Home / Mediterranean / 17,000 Islamic terrorists moved from Syria to Libya 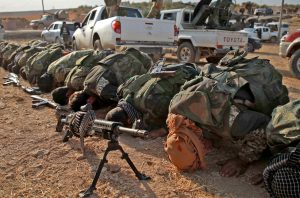 Libyan National Army (LNA) spokesman Ahmed al-Mismari dismissed on Sunday claims by Interior Minister of the Government of National Accord (GNA), Fathi Bashagha, that the military could be expelled from Tarhuna city, like reported by aawsat.com.

“Such remarks are aimed at raising the morale of the militias that are fighting with him,” he told Asharq Al-Awsat. “He is using such claims to bring in greater Turkish intervention in the fighting.”

“The militias attempted to attack Tarhuna on seven fronts in a comprehensive operation that saw the participation of Turkish drones and ground forces. They pushed with all they have and could not even come close to the city outskirts,” he stressed.

“Tarhuna will resist those who are fiercely vying to control it and cut off military supply routes,” he vowed. “We are aware of all of the militias’ targets and we are prepared for them.”

Tarhuna lies 88 kilometers southeast of the capital Tripoli and is a main supply base for the LNA’s operations in the west. Observers believe that the military loss of the city will deal it a major blow in the conflict and turn the tide against it.

Responding to Bashagha’s claims that the LNA was deliberately attacking Tripoli residents, Mismari said: “These allegations are baseless. It is odd that he is an interior minister, not a military spokesman on the ground who can report the truth of what is happening.”

The reality is that the random attacks are being launched daily by the militias from Mitiga base and the city outskirts, he stressed.

“There is a big difference between us and their targets and principles. They are defending the persistence of their militias and bases of power and money in Tripoli, while we are fighting to liberate Libya,” Mismari declared. “We are fighting for the dignity of the people and therefore, cannot strike them inside their homes and neighborhoods.”

“We are completely committed to safeguarding lives and perhaps, this is why the battle has gone longer than expected,” he added. The LNA relies more on breaching human defenses that on heavy weapons and excessive use of force.

Bashagha is not speaking from his position as minister, but rather as commander of operations and leader of the al-Marsa militia in Misrata city, he added. “He always tries to legitimize Turkey’s intervention in Libya. The latest of these attempts was the claim that the LNA was using chemical weapons during the fighting,” which Ankara would have used to legitimize its interference.

He accused Turkey of undermining the January 12 truce by bringing in large groups of Syrian and non-Syrian mercenaries. Citing sources from the pro-Ankara Syrian National Army, Mismari said more than 17,000 terrorists have been moved from Syria to Libya. Some 1,800 have gone back after being injured in fighting and more than 1,000 have been killed.

On the GNA’s recent capture of western coastal cities, he said the groups that have breached them were previously expelled from Sabratha in 2016 and it is only natural for them to carry out reprisals upon their return. He accused them of setting houses on fire, kidnapping citizens and killing youths right in front of their families.

“These terrorist and criminal actions have sent a strong message that dispels any talk that the GNA enjoys popular support,” he stressed.

“Turkey is waging a direct battle along with thousands of mercenaries,” Mismari continued. “Our forces were recently formed, assembled, organized and structured during the Benghazi battle. Turkey, on the other hand, has a strong army and is a member of NATO. It does not, however, have the principles that will allow it to achieve victory in the battle. We are defending what is right and we believe that victory will be on our side.”

“The battle still stands and we have accepted it from the start. We know our capabilities, but we have a lot of trust in the Libyan people, our real supporters,” he added

On whether the LNA fears Turkey may carry out direct strikes against its command headquarters in the east, Mismari said: “Turkey always threatens to use excessive force against the military. In fact, just days ago we witnessed Turkish military maneuvers near Tripoli. Turkey does not scare us. We know what it wants. We are a national army with a long history of heroics. We will fight to the end”.