You are here: Home / MidEastGulf / 1,700 Kurdish fighters deployed from Raqa to Afrin to stop Turkish invasion 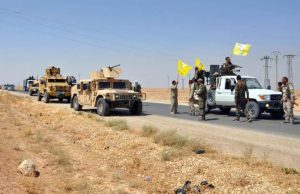 Jays Al-Suwar, an armed group operating within the Syrian Democratic Forces (SDF), said on Tuesday that it had redeployed 1700 fighters from Raqa to Afrin to support the Syrian Kurdish People’s Protection Units (YPG) in Afrin to repel Turkish forces and Ankara-allied Free Syria Army (FSA) offensive, like reported by basnews.com.

“Our people in Afrin are being slaughtered. We will support the YPG and defend our people” the Jays Al-Suwar spokesperson Ebu Amer Edlibi said at a press meeting in Raqa.

He also added that they will back Raqa after Afrin defending.

The Jays Al-Suwar is a part of SDF, fighting against the Islamic State (IS) in Raqa.