You are here: Home / MidEastGulf / 17 killed in ‘terrorist’ bomb attack on Saudi police at mosque 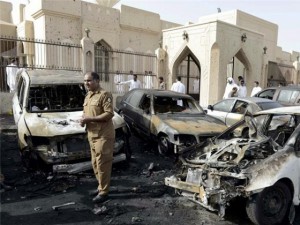 A “terrorist” bomb targeting a mosque used by Saudi Arabian police has killed at least 17 people in the southern city of Abha, state television El-Ikhbariya reported.

The suicide attack took place as worshippers were praying at a mosque used by Saudi special forces, the broadcaster said.

It described it as a “terrorist” attack. It gave no further details.

An interior ministry spokesman confirmed the attack but gave a slightly lower toll of “more than 13” dead.

The victims were members of a Special Weapons and Tactics (SWAT) unit, the spokesman said.

“It’s confirmed there’s an explosion and there’s more than 13 (killed) … in a mosque,” he said.

The explosion happened at the headquarters of the SWAT team, which is tasked with domestic security, he added.

It was too early to say who may have carried out the attack, he added.

Saudi Arabia has been on alert for attacks by the jihadist Islamic State group, which has been blamed for killing policemen and for slaughtering members of the minority Shiite community.