You are here: Home / West Asia / 17 killed in Taliban truck bomb, other attacks in Afghanistan 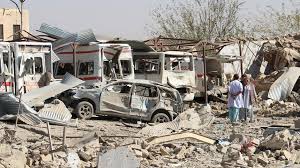 A wave of attacks across Afghanistan on Tuesday left at least 17 people dead and scores more wounded, officials said, including a Taliban truck bombing in the country’s north that targeted a commando base for Afghan forces, like reported by thenews.com.pk.

The violence comes as expectations had been rising that negotiations could soon get underway between the Afghan government and the insurgents as part of a February agreement between the US and the Taliban.

The truck suicide bomber struck in northern Balkh province, killing three people, including two Afghan commandos and a civilian, according to Munir Ahmad Farhad, the spokesman for the provincial governor.

According to Hanif Rezaie, the spokesman for the Afghan army corps in the north, initial military report said at least six commandos and around 35 civilians were wounded in that explosion, which also destroyed or damaged dozens of nearby civilians houses.

“Most of the wounded civilians are women and children,” said Rezaie.

Taliban spokesman Zabihullah Mujahid claimed responsibility for the Balkh attack in a tweet, claiming that “tens” of military personnel were killed. The Taliban often exaggerate their battlefield claims.

Taliban spokesman Zabihullah Mujahid said on Twitter that the attack was revenge for a video circulating online that appeared to show Afghan troops desecrating the bodies of Taliban soldiers in the south. Ministry of Defence has launched an investigation into the video, which surfaced earlier this month.

Afghan President Ashraf Ghani strongly condemned the attack in Balkh and said the Taliban have increased their attacks on major Afghan cities despite the February agreement. “The Taliban’s insistence on continuing war and violence is challenging peace opportunities,” he said in a statement.