You are here: Home / MidEastGulf / 17 ISIS elements killed and 4 people arrested seized in Karma and Baghdad 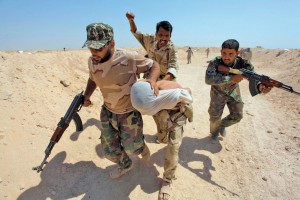 Joint Operations Command announced on Monday that the security forces backed by fighters from the Popular Mobilization Units (MPU) and clans, with the supportof the Iraqi air aviation and international managed to kill 17 elements of ISIS terrorist organization in al-Karma sub-district affiliated to Fallujah city, west of Baghdad.

The command said in a statement received by Shafaq News, that the ongoing liberalization operations of al-Karma sub-district and the surrounding areas resulted in killing 17 terrorists , wounding one and destroying three places of the enemy .

The statement added that the force of Baghdad Operations Command made a security operation in the areas surrounding Tarmiyah district resulted in the arrest of four people inside their house , seized three explosive devices .

The statement added that the leadership of Tigris Operations searched (Rabia –al-Sama – Imam Wes – al-Hafayer) villages and found three explosive devices in Imam Wes area that have been dismantled without losses.