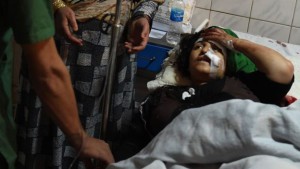 An Interior Ministry spokesman said that another 62 people, including 12 policemen were wounded in the attack.

An Afghan official says at least 17 people including a policeman are dead after a militant attack on a Shia shrine in the capital Kabul late Tuesday.

Sediq Sediqqi, the Interior Ministry’s spokesman said on Wednesday that another 62 people, including 12 policemen were wounded in the attack.

The attack on the Sakhi Shrine, Kabul’s biggest, happened as Shia Muslims were mourning the death of Prophet Mhammad’s grandson, Imam Hussein.

Mourning climaxes on Ashura Day, which falls on Wednesday, a public holiday in Afghanistan.

Shias, mostly ethnic Hazaras, had been warned by authorities to avoid large gatherings as attacks were expected.

No group has claimed responsibility for Tuesday’s attack.

In July, a suicide bomber attacked Hazaras at a public demonstration, killing 80 and wounding hundreds of others.