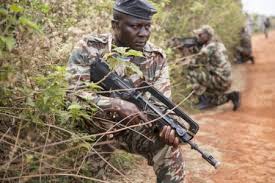 At least 17 fighters from the Nigerian Islamic extremist group Boko Haram have died in clashes with Cameroon troops in the border town of Amchide, informed sources said Tuesday.

“Fifteen Boko Haram (fighters) were killed Tuesday and several others injured,” a source close to regional authorities told AFP after the clash.

Two further members of the group, which is affiliated to Islamic State, died in a Monday night confrontation with soldiers, the source added, saying the army did not incur any casualties.

A security source who did not wish to be identified indicated that “Boko Haram made an incursion into Amchide yesterday” but were pushed back by Cameroonian troops.

The source added they returned Tuesday but were likewise repulsed.

Amchide is just over the border from the Nigerian city of Banki, which has been occupied for around a year by Boko Haram and which Nigerian troops are preparing to retake, according to Cameroonian sources.

Troops from both Nigeria and Cameroon belong to a multinational regional joint task also comprising forces from Benin, Chad and Niger tasked with driving back Boko Haram as it seeks to spread its sphere of influence.

The extremists have killed around 15,000 people in a six-year insurgency which has left more than two million homeless.