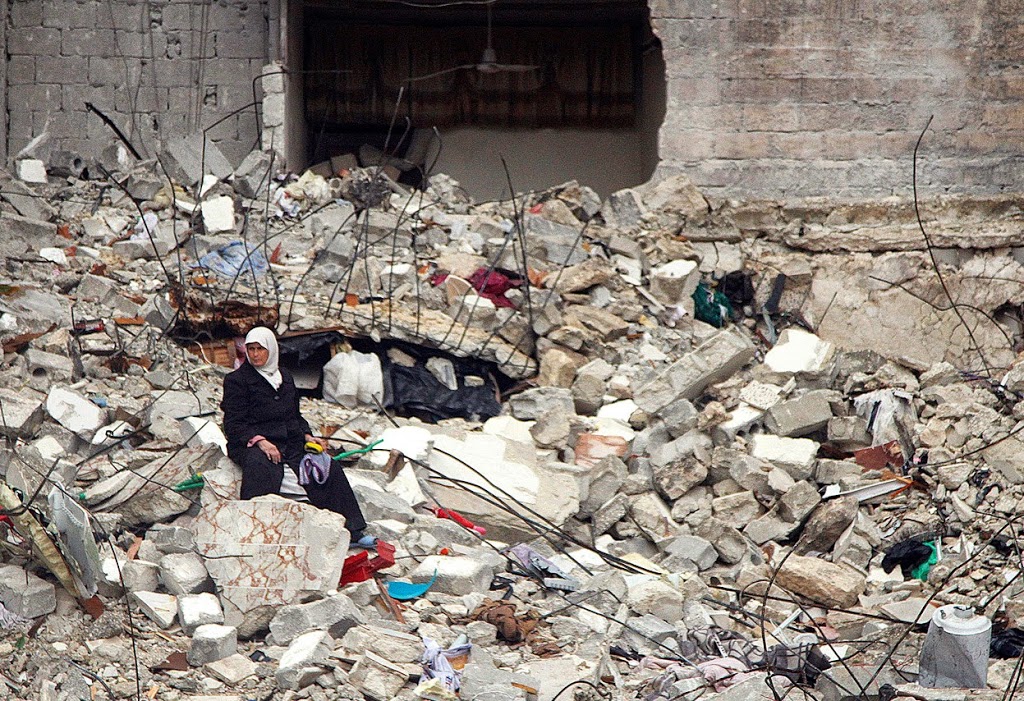 Twenty-three-year-old Louay was not alone on Valentine’s night, but he wasn’t with his girlfriend, either. He and some fellow enamored friends gathered by candlelight for an intimate evening.
Louay arranged candles in the shape of the letter R and told his friends about the last time he saw his girlfriend, Rama. “It was a lovely day, despite the short time we spent together. I can still remember how her eyes were filled with hope.
She admitted to her intense fear of being shot by snipers while crossing the Bustan al-Qasr crossing. Still, she rose above this fear to see me. … I miss her. I miss her madness and her gentle voice,” he said.
More than 13 months have passed since Louay and Rama’s last meeting. In February 2014, regime forces closed the only crossing that connected the two parts of Aleppo — the eastern side under opposition control, and the western side under the regime. As a result, the city has been divided and families separated.To move from one side of the city to the other requires a perilous journey across front lines. The journey, which takes more than nine hours in the best conditions, involves passage on “Khanasser Road,” which tranverses regions controlled by the Islamic State (IS).

Rama lives in the regime-held part of the city, while Louay lives in the area under opposition control. Although they are only a few kilometers apart, it is almost impossible for them to meet. Interestingly, it was three years ago, in January 2012, that Louay and Rama met, while organizing protests at Aleppo University to demand the regime’s ouster.

The same revolution that brought the couple together is now preventing Louay from seeing his beloved, as he is wanted by Syrian security.

Louay can no longer enter the regions under the regime’s control, and Rama’s attempts to trick her family into letting her see Louay have failed. With the closing of the crossing, she cannot visit her boyfriend and return home on the same day. Gazing at the candles Feb. 14, Louay said faintly, “All I wish for is to see her again and for us to live together. But I am not betting on this happening anytime soon.”

Louay had to drop out of Aleppo University, where he was in the Faculty of Science, because of pursuit by the security apparatus. He is currently volunteering as a teacher and can barely make enough to sustain himself. Rama is about to graduate from the same program Louay was in.

Louay said, “I love her truly, and I can’t imagine myself with anyone else. But to be realistic, my future is unclear, and I need some time to establish myself and pursue my studies. I don’t think that this will happen before the war ends. I am not sure she is willing to wait that long.”

In the past few months, Rama has received many wedding proposals, but has thus far turned them all down, telling her family that she wants to pursue her studies. She told Louay via Whatsapp about her family pressuring her each time a potential husband approaches her. Louay responded, “You will only be mine.”

Louay has no desire to travel abroad. His presence in Aleppo near his girlfriend, despite their separation, gives him hope and strength. In the past few days, however, he has begun researching refuge in Western countries and collecting money for a trip to seek asylum. Such an illegal voyage may be, he thinks, the only solution that will allow him a future and commitment to Rama. Louay acknowledged, “It does not seem easy at all, and I might drown trying.”

All of Louay’s friends have their own love stories to tell, all marked by the same kind of suffering — a lost future, a divided country and a distant lover because of the raging war. Still, they all agreed that although the war will last for some time, they won’t give up on love.