You are here: Home / West Asia / 16 dead as university attack ends in Kabul 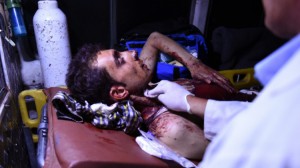 At least 16 people were killed in an attack on the American University of Afghanistan [AUAF] in Kabul that started late Wednesday when a suicide bomber plowed his explosive packed vehicle into the wall of the university, officials said on Thursday.

Mujahid said 39 others including nine police officers were wounded in the incident.

The university went into panic as students and staff asked for help from the Afghan security forces. Some were able to escape shortly after the attack started.

Security forces were forced to move slowly in ending the attack because 700 students were on campus when it began, Mujahid said.

Ahmad Samim, an associate professor at the university, said he begged for his life. “Don’t kill me I am very innocent,” he said on Twitter. The professor later said he was safe and away from the university.

The United States condemned the attack “in the strongest possible terms,” she said. “An attack on a university is an attack on the future of Afghanistan.”

Government Chief Executive Abdullah Abdullah condemned what he termed a cowardly attack on the university. “Attacking schools, universities & innocent people is a war crime. We can not bear it!” he wrote on Twitter.

Indian Prime Minister Narendra Modi condemned the attack while offering “Condolences to the bereaved families & prayers with the injured.”

Earlier this month one US and one Australian professor working at the American University were kidnapped by gunmen.

The American University of Afghanistan has around 1,000 students studying various subjects at the bachelor and master’s level.