You are here: Home / MidEastGulf / Sudan to send 10,000 troops to join Arab forces in Yemen 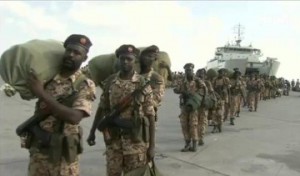 A new batch of Sudanese soldiers was deployed to Yemen on Monday to join the Saudi-led coalition fighting Houthi rebels who controlled most of the country including the capital Sana’a last year.

The UAE-based Sky News TV quoted sources in the 4th military region in Aden as saying that 450 Sudanese soldiers arrived in the coastal city today “as part of operations to strengthen security”.

“The soldiers who arrived are part of the second contingent of the force which Khartoum pledged to send,” another source told Turkish Anadolu news agency.

The spokesman of the Yemeni army Brigadier General Samir al-Haj said that the number of Sudanese forces is expected to reach 6,000 with expertise in fighting in the rugged mountains and will take part in the liberation of Ta’iz and Ibb.

But other security officials told Associated Press (AP) that Sudan plans to send a total of 10,000 soldiers.

The Sudanese Defense Minister Awad bin Auf said in remarks published by al-Watan newspaper in Saudi Arabia that the soldiers’ mission is focused on policing and any work assigned to them by the leadership of the Arab coalition.

“There are 6,000 fighters from special forces, ground forces and elite troops ready to participate when requested by the leadership of the coalition,” Sudan’s top military official declared.

The minister stressed that President Omer Hassan al-Bashir gave clear instructions for provision of all military support to Yemen.

“Even if more troops and military contribution is needed we are ready for any developments,” he added.

On Sunday, Saudi Arabia confirmed officially for the first time the participation of Sudanese ground forces.

At a time when Saudi Arabia’s strongest allies including Egypt and Pakistan have declined requests by Riyadh to send ground troops to Yemen, Khartoum has recently shifted its alliances in response to growing economic pressures at home.

Late last year, Sudanese authorities ordered the closure of the Iranian Cultural Centre in the capital Khartoum and other states and asked the Iranian cultural attaché to leave the country in a move seen as a gesture of goodwill towards the Arab Gulf states.