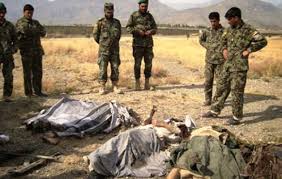 The ongoing conflict and militancy have killed 15 militants in northern Afghanistan and 15 de-miners have been kidnapped in the western Herat province over the past 24 hours, officials said Saturday.

The security forces in crackdown against militants in the northern Kunduz province have killed eight armed insurgents, an army spokesman in the province, Nasratullah Jamshidi confirmed.

“Eight Taliban militants have been killed and 10 others sustained injuries as government forces targeted Taliban hideouts in parts of the northern Kunduz province on Saturday,” Jamshidi told Xinhua.

The operations, according to the official, have covered Alchin and Taloki areas outside provincial capital the Kunduz city and would last for several days.

However, Jamshidi disputed Taliban’s claim, saying no security personnel has been hurt in the area over the past two days.

In a similar incident, the security forces have killed seven Taliban fighters and injured 10 others in Dawlatabad district of the northern Faryab province and recaptured two checkpoints from the insurgent group over the past 24 hours, provincial police chief Sayed Agha Andarabi told local media on Saturday.

“Fifteen personnel of a mine clearance agency were on their way to Kohsan district on Friday when a group of unidentified armed people kidnapped them on Islam Qala road and took them to unknown location,” Farhad told Xinhua.