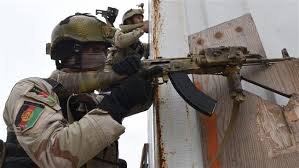 About 15 Taliban militants and six security force members were killed during clashes as Taliban briefly seized a district in Afghanistan’s western province of Herat Tuesday night, the authorities said Wednesday.

Hundreds of Taliban fighters attacked Ghoryan district and took the control of the district’s bazaar and government offices following heavy clashes in the province with Herat city as its capital, some 640 km west of Kabul.

“As a result of Herat police operations in respond to Taliban attack on Ghoryan district, a total of 15 Taliban terrorists have been eliminated,” Sediq Sediqqi, Afghan Interior Ministry spokesman, said on his twitter account.

A total of six security forces were also killed during the clashes in the district, bordering Iran, according to district officials. They said the militants retreated to outer sides of the district after setting on fire several security checkpoints and a number of government offices.

The Taliban has intensified attacks over the past couple of months as the Afghan security forces assumed the full security responsibilities from NATO-led troops since Jan. 1.

In southern Helmand province, sporadic clashes have been continuing in outskirts of provincial capital of Lashkar Gah, 555 km south of Kabul, as the Taliban militants advanced and captured several security checkpoints in suburbs of the city overnight, local officials said earlier on Wednesday, adding dozens of militants had been killed since the clashes erupted four days ago.

Taliban militants have also been attempting to take territory and consolidate their positions ahead of winter in the mountainous Central Asian country.

Nearly 1,600 civilians were killed and more than 3,300 others wounded in conflicts and attacks in the first half of the year, according to UN mission figures.