You are here: Home / MidEastGulf / 15 killed in Aden due to random shelling by Houthi forces 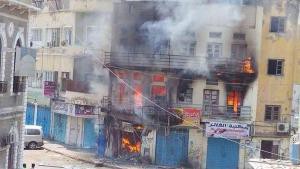 Around 15 civilians were killed and others injured in Dar Saad, Sheikh Othman, and Mansoora areas in Aden as Houthi militants backed by forces loyal to the Ex President Ali Abdullah Saleh continued bombing these locations on Thursday, according to medical sources.

Hospitals and medical centers in the north of the city are in desperate in need of blood and volunteers, “We can’t cope with the numbers of dead and injured admitted to our centers, we don’t have enough doctors, many of the injured need immediate surgeries and we are out of blood, our ambulances cannot reach the areas where the clashes are happening, and we are not safe in hospitals due to random shelling, the situation is terrible,” said one of the surgeons.

Locals said that the Saudi-led coalition did not launch any strikes today, and the random shelling from Houthi forces were taking place from outside the city of Aden.

Popular resistance are advancing in Khormaksar area and have taken control of Alain city in Abyan and Almosaimer district in Lahj after fierce clashes with Houthi militants which lasted for few days.