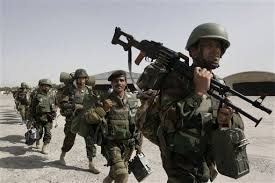 15 militants belonging to the militant group of Daesh have been killed in newest military operation in eastern Nangarhar’s Achin District of a stronghold of the group in Afghanistan’s east.

Spokesperson for the police HQ of Nangarhar Colonel Hazrat Hussain Mashriqiwal said that eight more militants were wounded in the operation yesterday.

The counter-terrorism operation in Achin District jointly launched by Afghan National Police and Army about six weeks before and according to col. Mashriqiwal it has been going on successfully.

Achin which shares border with Pakistan is one of the restive districts of Nangarhar province.

The district recently witnessed large-scale Daesh attacks on a number of its security posts, according to the Afghan (Khaama Press).

In the retaliatory action of the security forces, according to officials, at least two hundred militants were killed and a number of others wounded.