You are here: Home / Africa / 15 Boko Haram fighters killed in Niger by Defence and Security Forces 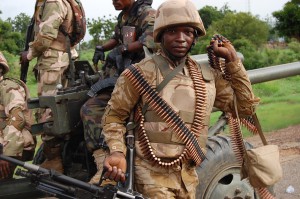 Fifteen Boko Haram fighters were killed and 20 others arrested by Defence and Security Forces (FDS) during clashes in the Diffa region of Niger, near the Nigerian border, defence ministry announces.

It said yesterday in Niamey that FDS launched ground and air operations in the area in retaliation for attack carried out on June 17 in Gueskerou community by the Islamist sect, killing 38 civilians.

Spokesman for Niger’s Defence Ministry, Mustapha Ledru, said 15 terrorists had been killed, 20 others arrested, one armoured vehicle recovered and 20 motorcycles destroyed during the latest army operation.

He affirmed that no injuries were reported on the part of the army. Nigerien National Defence Minister, Karidjo Mahamadou, hailed the “FDS for the brilliant operation against the terrorists.’’

He encouraged them to continue with the fight to restore peace and security in Niger as well as the subregion. For over three months, Niger, just like other countries in the Lake Chad Basin, has come under deadly attacks from Boko Haram from its bases in Nigeria, leaving tens of civilians and soldiers dead.

Nigerien and Chadian forces are currently engaged in a large scale operation against the Boko Haram sect to secure Lake Chad basin and stop further attacks in Nigerien regions of Diffa and Bosso.

Meanwhile, National Security Adviser, NSA’s office has released cheques of undisclosed sums to assist families of soldiers who died in the course of fighting Boko Haram insurgency in the North East. The cheques were presented to the next of kin of 62 deceased soldiers yesterday, in Abuja, by the Nigerian Army.

Chief of Army Administration, Maj.-Gen. Adamu Abubakar, who presented the cheques to beneficiaries, said they were provided by the Office of the National Security Adviser to assist the families.

Abubakar said the money was part of palliative measures put in place to cushion the effect of the loss of the fallen heroes to their immediate families.

He said: “These cheques are not part of the statutory payments; they are just a relief for the families of our fallen heroes in the North East.

“I must reiterate that the families must try as much as possible to start the processing of the benefits of their deceased relations as early as possible so that we can make prompt payment.

“After this, you still have a lot to collect; you have the group life assurance claim, benevolent fund, Nigerian Army Welfare Insurance Scheme and the gratuity of the soldier.

“And the last one will be the sponsorship of children that are below the age of 18 from nursery school up to the university which the Nigeria Army will take responsibility of.”

One of the beneficiaries, Mrs. Esther Odigie, expressed gratitude for the gesture as the amount given would go a long way to help the families.