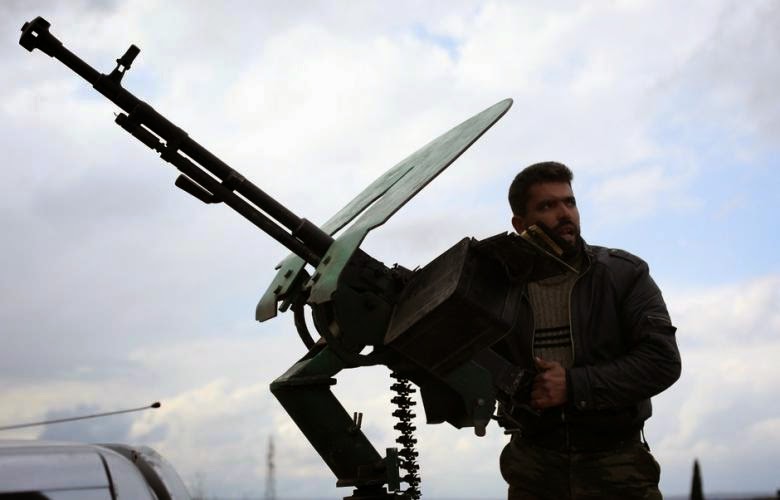 The United States has so far identified around 1,200 Syrian opposition fighters for potential participation in a US military-led program to help train and equip them to battle the Islamic State of Iraq and Syria (ISIS) group, the Pentagon said on Wednesday.

The fighters will undergo vetting for the program, which is expected to begin in March at multiple sites outside of Syria and train more than 5,000 Syrian fighters a year. Some 3,000 could be trained by the end of 2015, a US official said.

The program is expected to vet fighters using both US government databases as well as intelligence from regional partners.

Turkey, Saudi Arabia and Qatar have publicly offered to host the training and Jordan has privately offered to do so. One US official, speaking on condition of anonymity, said training is likely to start in Jordan.

At the Pentagon, spokesman Rear Admiral John Kirby declined to specify which sites might host the potential Syrian recruits identified so far.

“There’s about 1,200 individuals who have been identified for participation — potential participation — in this process and in this program,” Kirby told a news conference. “Where they will be trained, I don’t have that information right now.”

On Tuesday, the US and Turkey said they expected to soon sign an agreement on training and equipping “moderate” Syrian opposition fighters.

Turkey has been a reluctant partner in the US-led coalition against the insurgents, refusing a frontline military role despite its 1,200 kilometer (750-mile) border with Iraq and Syria. But it agreed in principle to train and equip Syrian rebels and is already training Kurdish peshmerga fighters in northern Iraq.

Regarding Tuesday’s deal, several US officials have told Reuters the Syrian fighters would be equipped with items including pickup trucks with mounted machine guns, radios and global positioning system trackers.

The Wall Street Journal reported on Tuesday that the radios and GPS equipment would enable the fighters to call in airstrikes. But Kirby stressed that the training mission was not meant to create “Syrian forward air controllers,” although he acknowledged their potential assistance in identifying targets.

“I can’t rule out that at some point, that we might find it useful for them to have the ability to help assist with targeting on the ground,” he said.

The Pentagon has previously estimated that more than 400 US troops, including special operations forces, will train Syrian fighters. Hundreds more US forces will be sent to support them. Kirby estimated that the total force involved in the training mission could reach about 1,000 troops.

The US-led coalition of around 60 mainly Western and Arab states was formed several months after ISIS swept across northern Iraq in June, seizing swathes of territory and proclaiming a caliphate in parts of the country as well as regions in neighboring Syria.

Critics opposed to US involvement in the conflict with ISIS have pointed out that Washington in partnership with its allies, including Turkey, played a role in the formation and expansion of extremist groups like ISIS by arming, financing and politically empowering armed opposition groups in Syria.

In an interview with CNN, Barak Barfi, the spokesperson for the family of American journalist Steven Sotloff murdered by ISIS, said that “moderate” Syrian rebels backed by the United States government sold Sotloff to the group.

“We believe that these so-called moderate rebels that people want our administration to support, one of them sold him probably for something between $25,000 and $50,000 to ISIS and that was the reason he was captured,” Barfi declared.

Former 16-year member of the US Congress and two-time US presidential candidate Dennis Kucinich wrote in an article for The Huffington Post in September entitled “8 Reasons Why Congress Should Vote No on Training and Funding Syrian Rebels.”

In his article, Kucinich warned that “funding Syrian rebels will precipitate a new and wider war in the Middle East.”

“Saudi Arabia, which, with Qatar funded the jihadists in Syria, is now offering to ‘train’ the rebels,” which means that “the sponsors of radical jihadists are going to train ‘moderate’ jihadists,” Kucinich added.

Kucinich also described the US Treasury as becoming the “piggy bank” of ISIS.

“The US has supplied weapons to the Iraqi government and to Syrian rebels which have ended up in the hands of ISIS,” he explained. “As a result, the US Air Force has been bombing Humvees and armored troop carriers purchased with US taxpayer money.”

A study published in September 2014 by the London-based small-arms research organization Conflict Armament Research revealed that ISIS jihadists appear to be using US military-issued arms and weapons supplied to the “moderate” rebels in Syria by Saudi Arabia.

The report said the jihadists disposed of “significant quantities” of US-made small arms including M-16 assault rifles and included photos showing the markings “Property of US Govt.”

As for Turkey, the Syrian government has consistently accused the NATO member of playing a major role in fueling the armed crisis in Syria by opening its borders and allowing free access to foreign jihadists into Syria.

According to a UN report published in November, Turkey has been singled out as a major transit point for ISIS’ oil deliveries, with trucks often returning to Iraq or Syria with refined products.

In mid January, social media sites Twitter and Facebook, along with many other websites, were blocked in Turkey after anonymous accounts published new evidence in an ongoing case accusing Turkey of illegally shipping weapons to Islamist militants in Syria.