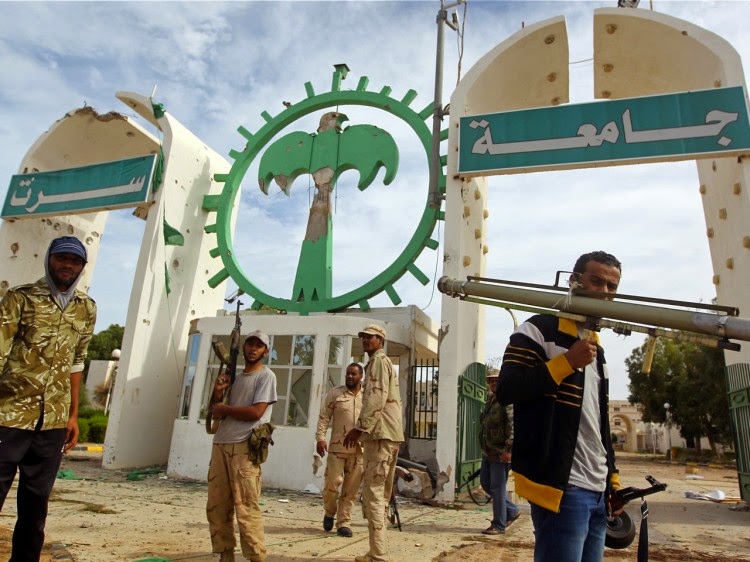 Militants claiming affiliation with the ISIS took over the university in the Libyan city of Sirte on Thursday, leading it to suspend classes and postpone exams, a professor said.

The incident came a day after dozens of gunmen paraded through the streets of the Mediterranean coastal city, 450 kilometres east of Tripoli, in a convoy, witnesses said.

It also came as Fajr Libya (Libya Dawn), a coalition of militias that controls Libya’s capital and much of the lawless country’s west, said it had sent units to “restore security in the city.”

Social media showed photos of hooded gunmen in pick-up trucks and 4X4 vehicles mounted with anti-aircraft guns, brandishing the black flag of Daesh, which has seized large swathes of Syria and Iraq and is believed to have extended its presence to the North African country.

Witnesses said the gunmen had also taken over the once grandiose Ouagadougou Centre in what is the hometown of the late Muammar Qadhafi, where the then dictator once organised extravagant African or Arab summits.

An AFP photographer who managed to visit the city briefly, said the Fajr Libya and Daesh forces were keeping their distance from each other and that there had been no hostilities between them.

Sirte is a bastion of a group called Ansar Al Sharia, classified as a terrorist organisation by the United Nations, which is believed to have links to Daesh.

Several days ago, Daesh affiliates in Libya released a video showing their beheading of 21 Coptic Christians, most of whom were Egyptian, taken prisoner in the country.