You are here: Home / Mediterranean / 14 pro-Tobruk troops killed in clashes in Libya’s Darnah 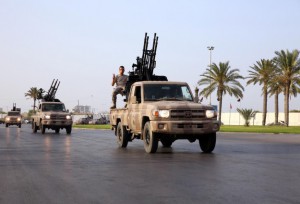 Fourteen soldiers loyal to Libya’s Tobruk-based government were killed on Sunday in clashes with militants associated with the Mujahideen Shura Council in the eastern city of Darnah, according to a local security source.

The source told Anadolu Agency that the soldiers had been killed in clashes – which, he said, remained ongoing – “with gunmen from the Mujahideen Shura Council in the Ain Marra area near Darnah.”

The Mujahideen Shura Council, which is currently in de facto control of Darnah, was established last December to combat the Libyan army and the Daesh militant group.

Libya has remained in a state of turmoil since a bloody uprising ended the decades-long rule of Muammar Gaddafi in late 2011.

Since then, the country’s stark political divisions have yielded two rival seats of government, each with its own institutions and military capacities.

Vying for legislative authority are the Tobruk-based House of Representatives and the General National Congress, which convenes in capital Tripoli.

Despite frequent clashes, representatives of the warring parties continue to engage in UN-backed peace talks.