You are here: Home / Mediterranean / 14 militants killed in security raids in Egypt’s Sinai 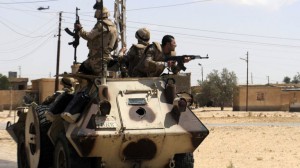 As many as 14 militant extremists were killed during military raids in Egypt‘s restive North Sinai province’s two cities of Rafah and Sheikh Zuweid, the Egyptian military spokesman said in a statement on Sunday.

Since the beginning of November, similar raids in the northern part of the peninsula left 26 militants dead while the security forces ruined nearly 100 explosive devices.

Meanwhile on Nov. 4, a military brigadier general who served in Sinai, was assassinated, outside his home in Cairo. Earlier in mid-October, at least 20 soldiers were killed in two-day blasts.

Egypt has been facing a wave of anti-security terrorist attacks, mainly centered in North Sinai, since the army-led removal of former Islamist president Mohamed Morsi in 2013 in response to mass protests against his one-year rule.

Hundreds of police and military men were killed in revenge attacks, with a Sinai-based Islamic State affiliate group claiming responsibility for most of them.