You are here: Home / Mediterranean / 14 killed in clashes in Libya’s Benghazi 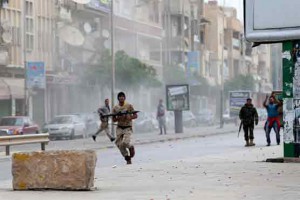 At least 14 people were killed in battles in Libya’s second city Benghazi between militiamen and forces loyal to the internationally recognized government, hospital officials said Thursday.

The fighting erupted Wednesday morning in the center of the city, cradle of the 2011 NATO-backed uprising that toppled and killed veteran president Moammar Gadhafi, the officials said.

The Benghazi Medical Centre said on its Facebook page that it had received the bodies of 13 people as well as 50 wounded.

Al-Jalaa hospital said it was hit by a rocket that killed one person and wounded three.

It was not immediately clear if those killed and wounded in the clashes – which subsided late Wednesday – were civilians or fighters.

Benghazi has been reeling from more than a year of near-daily clashes between pro-government forces and armed groups, including Islamists, battling for control of the eastern city.

At least 1,700 people have been killed in the violence since early 2014, according to the Libya Body Count watchdog.

Elsewhere in Libya, a senior military intelligence officer was killed in third city Misrata Wednesday when a bomb concealed in his car exploded, a security official said.

The officer, Taher Allush, was close to Fajr Libya, a militia alliance which seized Tripoli in August last year and set up a rival government and parliament.

Libya was plunged into chaos after the overthrow of Moammar Gadhafi’s regime in 2011, with rival militias fighting for their own territorial and financial interests in the oil-rich country.