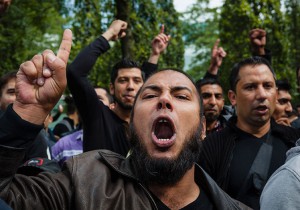 The charges come a day after the minority community’s self-declared spiritual leader — controversial Roma imam Ahmed Moussa Ahmed — was jailed for two years in another trial for propagating “anti-democratic ideals” and inciting hatred on religious grounds.

The 13 men and one woman from the central cities of Plovdiv and Pazardzhik were arrested at the end of March after a seven-month investigation, the chief prosecutor’s office said in a statement.

They have been charged with “preaching racial hatred” and “propagating war by spreading the ideas of the terrorist group Islamic State,” the statement said.

Twelve of the charged were placed under arrest and two released on bail, the office added.

Pomaks are Slavs whose Christian ancestors were forced to convert to Islam during the country’s Ottoman domination.

Bulgaria’s chief mufti, the official spiritual leader of the country’s Muslims, has distanced himself from the suspects.