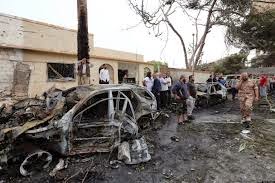 There was no immediate claim of responsibility, but the parliamentary speaker for Libya’s internationally recognized government, Aguila Saleh, said the bombs appeared to be in retaliation for Egyptian airstrikes on nearby Derna.

Three bombs exploded in Qubbah at a petrol station, the local security headquarters and the town council headquarters. Qubbah is the populated place between the eastern cities of Derna and Bayda.

A security official said the car bombs were probably suicide attacks, but no more details were immediately available.

“We are announcing seven days of mourning for the victims of Qubbah,” Saleh told Al Arabiya television. “I think this operation was revenge for what happened in Derna.”

On Monday, Egypt launched airstrikes on suspected Islamic State of Iraq and Syria (Daesh) targets near Derna, a day after the group released a video showing the execution of Egyptian workers.

Almost four years after a NATO-backed war ended Muammar Gaddafi’s one-man rule, Libya has descended into chaos with the internationally-recognized government of Prime Minister Abdullah al-Thani forced to flee to the country’s east and militias in control of Tripoli and other main cities since August.

The country’s main militias, including the Islamist-backed Fajr Libya (Libyan Dawn) coalition that has declared a rival government in Tripoli and has been involved in the peace talks, have not linked up with Daesh jihadists.

Amid the chaos, a number of Islamist militant groups have been active in Libya. A few have declared ties to Daesh and claimed high-profile attacks over recent weeks in what appears to be an intensifying campaign.