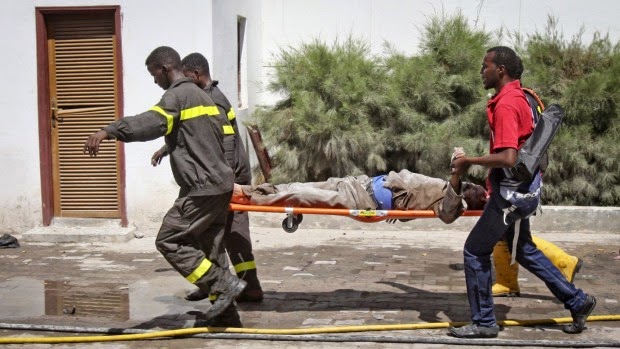 Somalia’s al-Qaeda-linked Shabab insurgents have killed at least 25 people in an attack on a popular hotel in the capital Mogadishu where government ministers and officials were holding Friday prayers.

Twin explosions followed by heavy gunfire were heard on Friday from the upmarket Central Hotel, close to the presidential palace, with the Islamist gunmen reportedly blasting their way into the fortified building before storming the complex.

An official at the presidential palace said at least 25 people were killed and the severity of injuries among the wounded meant the death toll was expected to rise.

Government sources said that the deputy mayor of Mogadishu and a member of parliament was killed, while the deputy prime minister and minister of transport were injured.

The hotel attack began with two explosions caused by a car bomb and a suicide bomber followed by gunmen who charged the building, with heavy gunfire heards as security forces took back control.

“There were very many wounded people too, many of them seriously.”

Ali Hussein was close to the hotel when the attack took place.

“There were people covered in blood, I counted 10 dead bodies but that was only in one area,” he said.
Shabab militants claimed responsibility for the attack.

“Our fighters attacked the Central Hotel,” Shabab spokesman Abdulaziz Abu Musab. “The aim is to kill the apostate officials.”

Shabab rebels have staged a string of assaults in their fight to overthrow the country’s internationally-backed government.

The extremists say they are targeting government officials for permitting the deployment of foreign African Union troops on Somali soil.

“My heart goes out to those who have suffered. We stand firm with the Somalia people,” he said in a statement.