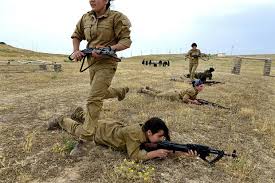 More than 1,300 Yezidi women and men are undergoing voluntary military training at a base in Shingal by the Ezidkhan Protection Units, as the community recovers from a devastating attack by the Islamic State (ISIS) in August 2014.

“We have come here to protect this land and our dignity. Now we better defend this land ourselves,” said Xeri Saeed, a volunteer.

Since the launch of the training, some 1,300 Yezidi men and women volunteers have joined the force and the number is on the rise, Saeed said.

The Ezidkhan Protection Units were formed shortly after Shingal fell to the Islamic State (ISIS). But organizers said that efforts to seek funding for it from the Kurdistan Regional Government (KRG) did not succeed, nor did they succeed in getting it recognized as a regular force.

“This base was opened not to oppose any party, but to strengthen Yezidi men and women to defend their land, dignity and reputation in the face of any future threat,” said a military trainer at the base.“We called on the KRG to recognize our force, but they have not answered our request yet,” he said.

According to Article 121 of the Iraqi constitution, no force except the Peshmerga can be formed in the autonomous Kurdistan Region.

Shingal mayor Mahma Khalil has said that the militia has recently received $2.3 million from the Iraqi government for the force. He said Baghdad did not see any difference between the Yezidi force and the Shiite Hashd al-Shaabi militia that it funds and maintains.

Since the attack on Shingal, several forces remain in the area, including the Peshmerga and units of the Kurdistan Workers’ Party (PKK) as well as the Shingal Protection Units and Shingal Resistance Units.