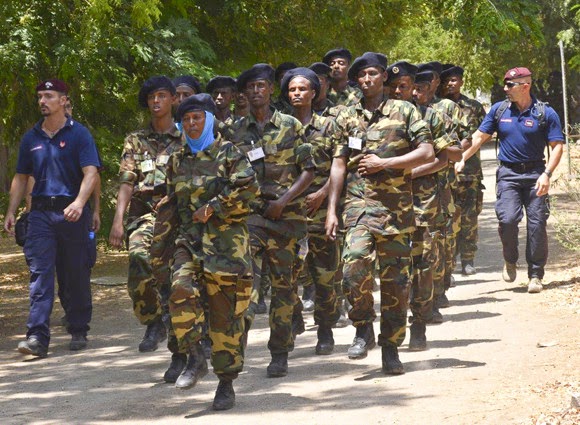 The Carabinieri officially launched the Somalia 3 Italian training mission (MIADIT) a couple of days ago in Djibouti. The Carabinieri will train 199 Somali police agents, including 13 women.

The capacity building project was promoted in a bilateral cooperation agreement between the governments of Italy and Somalia and will be implemented by the Carabinieri in the bordering Djibouti, a small but strategically located former French colony at the mouth of the Bab el Mandeb Strait between the Red Sea and the Indian Ocean, where Italy has a military base.

This year’s training mission is the third one, after the previous ones held in 2013 and 2014. Training will be provided over a 12-week intensive course comprising basic training modules for police officers on the control procedures for both people and vehicles, basic investigative techniques, crime scene on-site evidence searching and finding procedures, in addition to the basics in human rights and international law.

The Somali police agents were given uniforms and learning materials by Italy and were subdivided into classes, which were subsequently assigned to their respective trainers, who will monitor them throughout the training period.

At the end of the course, the roughly 200 trainees will add on to the 350 already trained in the two previous cycles and who now carry out high-profile tasks thanks to their high level of training.

This year, the team of top-ranking trainers will again be under the command of Colonel Paolo Pelosi and the course will include two new specialist training modules, both theoretical and practical, for 40 members of the Djibouti national police.

The final aim of the course is to facilitate the stability and security of Somalia and of the whole Horn of Africa region, focusing on capacity building in the territorial control and security activities of national police forces.