You are here: Home / Mediterranean / 13 soldiers killed in Libya fighting 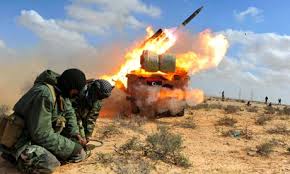 At least 13 members of Libya’s army were killed by violence on Tuesday in the east of the war-torn country, an army spokesman said.

“Most of the soldiers were killed by landmines planted by terrorist organisations,” spokesman Miloud al-Zawi told LANA, the official news agency of the internationally recognised government.

Zawi said that 16 security personnel died in all, but only named 13 that were killed on Tuesday. It was unclear when or how the other three died.

According to LANA, the soldiers were killed in different conflict areas around the eastern city of Benghazi, where their forces were trying to advance.

Zawi insisted, however, that the army forces had “made advances and secured a major victory”.

He said troops had managed to wrest control of a military base, adding that “battles will continue and will not stop until the areas controlled by the terrorist groups are liberated”.

Zawi did not elaborate on which areas or bases were being targeted, or which groups the army was fighting.

Libya has had two rival governments in place since August 2014, when a militia alliance overran the capital and set up its own parliament in Tripoli while forcing the internationally recognised government to move to Tobruk, in the east.

The oil-rich North African country descended into chaos after the fall of Muammar Gaddafi in 2011.

The UN has been brokering talks to create a new unity government to end fighting between the army and the militias that seized Tripoli, with the new UN envoy to Libya, Martin Kobler, voicing hope that an agreement is imminent.

Leon came under heavy media scrutiny last week when it surfaced that he had taken a high-paying position with the UAE government – which supports the Tobruk government – while serving as UN envoy. Critics were subsequently quick to question his impartiality in playing mediator between the two administrations. Leon has dismissed any suggestion of bias.

Under the proposed power-sharing deal, Libya will be governed by a nine-member presidential council made up of a prime minister, five deputy prime ministers and three senior ministers.

But both sides have so far rejected the deal.