You are here: Home / Africa / 13 Shabaab recruits rescued by KDF in Somalia 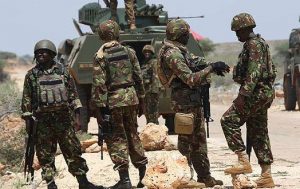 The Kenyans aged between 18 to 38 years were reportedly lured by a resident in the coastal city of Malindi, like reported by capitalfm.co.ke.

Two among the 13 are said to be from Bargoni in Hindi area of Lamu County while the other 11 are from Malindi.

The 13 were flown to Malindi from Kiunga by KDF personnel where they were being held and were received by Malindi Police Chief Matawa Muchangi.

The returnees were recruited on March 26, 2018 and KDF managed to rescue them on April 29 after some reported to their families and the matter brought to the attention of security personnel.

Muchangi said the Kenya Defence Forces personnel in Somalia rescued them at Ras Kamboni on April 29 and handed them over to Kenyan police to facilitate reunion with their families.

“They were today flown from Kiunga in a KDF chopper and brought to Malindi and are currently being held at the Malindi Police Station waiting to be reunited with their families,” said Muchangi.

He said security forces in Kilifi County have launched a manhunt for three Al Shabaab recruiters who are being the syndicate.

The three Mohamed Ali, Abdalla Shekue, Yusuf Ali coordinated a plan to recruit 13 youths who unknowingly accepted a job offer of fishing only to find themselves being pushed to join the Al Shabaab in Somalia.