You are here: Home / West Asia / 13 militants killed in Pakistan 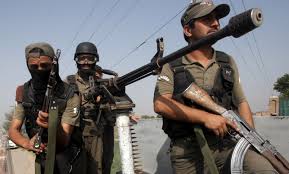 At least 13 militants have been killed during a raid by security forces in Pakistan’s troubled southwestern Balochistan province.

The incident occurred when security forces launched a search operation was launched in the Awaran district on Sunday night.

“13 militants were killed after exchange of fire with security forces, a huge cache of weapons was recovered from their custody. Their bodies have been moved to a local hospital ,” a local administration official said.

The militants had opened fire on the security forces who retaliated and several militants were also injured but escaped with the help of their fleeing accomplices, the official said.

The search operation was carried out after militants attacked a convoy of security forces in the Tankour area of Awaran on Sunday night.

The official said the battle with the militants had continued throughout the day on Monday.

Balochistan has been hit by violence by ethnic Baloch seeking greater control over resources and al-Qaeda linked militants.

Under the National Action Plan, the groups are being targeted through a systematic action by the security forces.