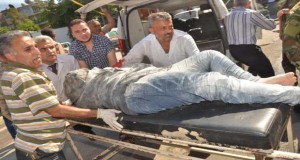 The city is divided between government control in the west and rebels in the east.

Rebels often fire rockets and makeshift missiles into the west, while the regime carries out aerial bombardment of the city’s east.

Elsewhere, state media said seven people were killed in a car bombing in Hasakeh, a day after twin suicide car bomb attacks in the northeastern city.

State news agency SANA said at least 21 people were wounded in the attack, which was later claimed by the Islamic State (IS) group in a statement on social media.

The Syrian Observatory for Human Rights, a Britain-based monitor, said the attack targeted a position of the Kurdish People’s Protection Units (YPG).

The attack came a day after twin blasts killed 32 people in Hasakeh, including 19 civilians, according to the Observatory.

Six Kurdish security forces and seven fighters from a pro-regime militia were also killed in the attacks, which were also claimed by IS.

Control of Hasakeh city — and other parts of the province itself — is divided between Kurdish militia and forces loyal to President Bashar al-Assad.

The city has regularly been targeted by IS, which controls some territory in Hasakeh province.

The group seized several neighbourhoods in June, but was expelled a month later in battles involving regime troops and Kurdish fighters.

More than 240,000 people have been killed in Syria since the conflict began in March 2011 with anti-government protests.

The fighting has since evolved into a complex civil war involving rebels, the regime, jihadists such as IS and Kurdish fighters.