As Israel moves to reinforce border wall and Lebanon fights over its territorial waters, American mediation is making little headway – and Hezbollah isn’t helping, like reported by haaretz.com 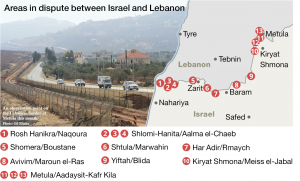 The dispute between Israel and Lebanon over the route of the northern border centers around Lebanese claims regarding 13 border points that the United Nations decided on 17 years ago. Tensions have increased in recent weeks based on two developments — the start of Israeli defensive efforts near Metula and the Rosh Hanikra area, and Lebanon’s renewed preoccupation with the two countries’ maritime borders due to the search for natural gas reserves in the Mediterranean.

When the government of Prime Minister Ehud Barak completed Israel’s withdrawal from southern Lebanon in May 2000, Israel waited for UN confirmation that it had withdrawn completely to the international border, in accordance with UN Security Council Resolution 425.

A few months later the confirmation was given after the Israel Defense Forces, in cooperation with the UN Interim Force in Lebanon, marked the border at several points where the United Nations had reservations. Israel moved the fence to the south, sometimes by a few dozen meters.

At the same time, Lebanon continued to make complaints about the route of the border. One reason was that the border had been drawn based on a map from the cease-fire agreement of 1949, a map with a scale of 1:50,000. As a result, there were places where the line’s thickness on the ground reached about 50 meters, leading to disputes between the sides.

Throughout the years, Lebanon has focused its complaints on 13 points where the fence and IDF outposts entered its territory north of the line drawn in 1949. Israel also has complaints about the precision with which the border was determined. For example, Israel claims that the south Lebanese highway near Kibbutz Misgav Am passes inside its territory.

A key Lebanese claim touches on the location of the border on the Rosh Hanikra coast. This is an important question because the two sides disagree on a marking on the coast — at a place where the Lebanese are gearing up to search for gas. Additional Lebanese claims relate to the following places from west to east: three points in the area opposite the town of Shlomi and Kibbutz Hanita, near moshavim Shetula and Shomera, opposite Mount Adir, opposite Avivim, opposite Kibbutz Yiftah, opposite Kiryat Shmona and another three points opposite Metula.

There are also other disputes regarding the area of Har Dov (which the Lebanese call the Shebaa Farms), but there Israel says the area was actually captured from Syria in the Six-Day War in 1967, not from Lebanon.

In the past month the Lebanese government has voiced many protests about IDF work along the border in two areas: between Metula and Misgav Am and in the Rosh Hanikra area. The Lebanese are also worried because the building of a wall instead of a fence is seen as a more permanent step.

Israel says it is determined to continue with the project, which is scheduled to last a few months along several kilometers. So far walls have been put up along only about 300 meters (328 yards). Israeli leaders are keeping close track of the barrier’s progress.

The project is designed to improve the IDF’s preparedness in light of fears of a sudden attack by Hezbollah, perhaps starting the next war. The army has been mapping the weak points along the border and has launched engineering projects to make any Hezbollah attacks on IDF outposts or Israeli communities along the border more difficult.

David Satterfield, the U.S. assistant secretary of state for near eastern affairs, has in recent weeks taken part in mediation attempts between Israel and Lebanon, though there has been no proof of any breakthrough. The party raising most of the complaints is the Lebanese government, while Hezbollah’s leaders say the problem is an Israeli blow to Lebanese sovereignty, so the Beirut government must deal with it.