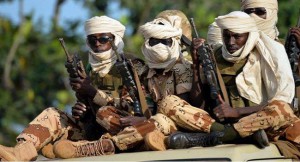 The defence ministry in Niger said 123 Boko Haram militants have been killed since July and a significant quantity of weapons impounded.

The ministry said the killings were carried out by the combined forces of Niger and Chad.

Allied Chadian-Nigerien forces launched an offensive against the Islamists after a surprise attack in Niger killed 30 of the country’s troops in early June, its deadliest ever attack there.

Defence Ministry spokesman Colonel Moustapha Ledru said 14 of the two nations’ own troops had also died and 39 had been wounded in fighting with the Nigerian militant group over the same period.

“An important quantity of arms and weapons were recovered,” he added.

Boko Haram is waging a guerrilla war to establish a breakaway Islamic caliphate around the Lake Chad region, where Nigeria, Cameroon, Niger and Chad meet.

Ledru said a parallel offensive involving Nigerian forces had recaptured four towns from the Islamists, whose insurgency has killed thousands and displaced 2.4 million.

The U.N. humanitarian coordinator for the region said on Friday that tens of thousands of people are dying of hunger because insecurity has prevented farmers tilling the land and made access for aid agencies almost impossible.

Boko Haram, referred to by themselves as Wilayat Gharb Ifriqiyyah (Islamic State West Africa Province, ISWAP), and Jama’at Ahl as-Sunnah lid-Da’wah wa’l-Jihad “Group of the People of Sunnah for Preaching and Jihad” is an Islamic terrorist group based in northeastern Nigeria, also active in Chad, Niger and northern Cameroon. Boko Haram has also been translated as “Western influence is a sin” and “Westernization is sacrilege”. The group’s leader is Abubakar Shekau. The group had alleged links to al-Qaeda, but in March 2015, it announced its allegiance to the Islamic State of Iraq and the Levant (ISIL). Since the current insurgency started in 2009, it has killed 20,000 and displaced 2.3 million from their homes[13] and was ranked as the world’s deadliest terror group by the Global Terrorism Index in 2015.

After its founding in 2002, Boko Haram’s increasing radicalization led to a violent uprising in July 2009 in which its leader was summarily executed. Its unexpected resurgence, following a mass prison break in September 2010, was accompanied by increasingly sophisticated attacks, initially against soft targets, and progressing in 2011 to include suicide bombings of police buildings and the United Nations office in Abuja.

In April 2014 Boko Haram kidnapped 276 schoolgirls from Chibok. Shekau announced his intention of selling them into slavery. More than 50 escaped. The incident brought Boko Haram extended global media attention. In mid-2014, the militants gained control of swathes of territory in and around their home state of Borno, estimated at 50,000 square kilometres (20,000 sq mi) in January 2015, but did not capture the state capital, Maiduguri, where the group was originally based.

Starting in late January 2015, a coalition of military forces from Nigeria, Chad, Cameroon, and Niger began a comprehensive campaign against Boko Haram. And with the arrival of new military hardware from East-Europe including the T-72 tanks, Helicopter gunships(Mi-171Sh, Mi-35 Terminator Assault Helicopters), Nigerian Military were able to effectively change the narrative in the battle against Boko Haram. On 7 March 2015, Boko Haram’s leader Abubakar Shekau pledged allegiance to ISIL via an audio message posted on the organisation’s Twitter account. Nigerian army spokesperson Sami Usman Kukasheka said the pledge was a sign of weakness and that Shekau was like a “drowning man”. On 12 March 2015, ISIL’s spokesman Abu Mohammad al-Adnani released an audiotape in which he welcomed the pledge of allegiance, and described it as an expansion of the group’s caliphate to West Africa.

By March 2015, Boko Haram tally of lost Nigerian towns included Mubi, Bama and Gwoza to the Nigerian army. The Nigerian Security authorities said that they had taken back 11 of the 14 districts previously controlled by Boko Haram. In April, four Boko Haram camps in the Sambisa Forest were overrun by the Nigerian military who freed nearly 300 females. Boko Haram forces were believed to have retreated to the Sambisa Forest and Mandara Mountains, along the Nigeria-Cameroon border, where they have been facing a continuous onslaught from the Nigerian Military. Rebuilding of several reclaimed towns from Boko Haram sect started in 2015 with Assistance from EU, World Bank and United States. Estimates of total infrastructure cost for the North-east is around $2.1 billions.