You are here: Home / Senza categoria / Yazidis battle ISIL: Disaster ‘made us stronger’ 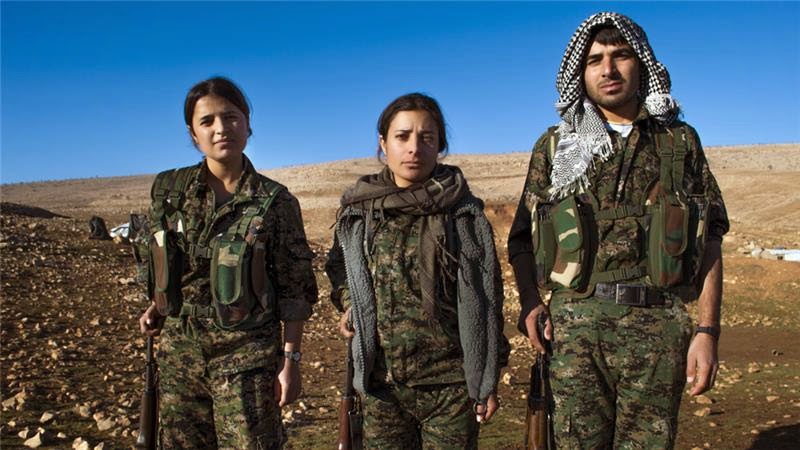 A 600-strong Yazidi militia force has been fighting back against ISIL at Iraq’s Mount Sinjar.

Beritan Soza barely has to lower her head when she climbs out of the mud-caked tent she calls home. The 18-year-old clutches a Kalashnikov rifle that hangs off her shoulder, gripping it tightly so the strap does not slip. The gun, she tells Al Jazeera, was given to her three months ago by the Sinjar Resistance Units (YBS), and she has not let it out of her sight since.

Soza says volunteering to fight with the YBS – an all-Yazidi militia force of 600 fighters based on Mount Sinjar – has given her a feeling of control. Hundreds of thousands of Yazidis have been displaced since last August, when the Islamic State of Iraq and the Levant (ISIL) advanced on Sinjar in Nineveh province.

“I’m not a victim,” Soza says. “The disaster that happened to the Yazidi people just made us stronger. We know we don’t need anyone to help us now, because we are helping ourselves.”

The Yazidis, an ethno-religious minority in Iraq, follow an ancient Mesopotamian religion with roots in Zoroastrianism. Yazidis, referred to as “devil worshippers” by ISIL, have been targeted by the group’s fighters.

Soza and her family, along with thousands of others, fled to Mount Sinjar on the first day of ISIL’s assault on the area. Local Kurdish Peshmerga forces put up a weak defence before pulling back, leaving the Yazidi population unprotected.

Determined not to rely solely on outside powers for protection, the people on the mountain began to organise their own defence force. YBS fighters train alongside the People’s Protection Units (YPG), a Kurdish militia based in northern Syria, and the Kurdistan Workers’ Party (PKK), a Kurdish militia known for its clashes with the Turkish state.

About 10,000 Yazidis live in erratic rows of tents stretching across the mountain, looking down on swaths of ISIL- controlled territory below. Among them is Roghar Habaabi, who watches the plumes of smoke from Sinjar rise above the mountain from his family’s tent. Deep explosions reverberate from below, but they do not bother him – this is normal, he says.

When not fighting in the streets of Sinjar below, Habaabi says, he and his fellow YBS fighters patrol the mountain.

“They [ISIL] are barbarians,” Habaabi tells Al Jazeera. “They depend on car bombs and suicide attacks.”
The YBS is an unconventional presence. Young men and women in mismatched military fatigue ensembles move between tents. A young man with a belt of ammunition strapped across his torso carries cases of water back to a tent, a machine gun hanging off his back.

Young YBS fighters gather between the tents under the direction of Said Hassan Said, a leader of the Yazidi Democratic Movement (TEVDA), a political group that sponsors the militia.

Said, who also lives on the mountaintop, believes the YBS is just the first step towards a better future for Iraq’s Yazidi community. He says the Yazidi people need their own government, and is calling for an autonomous Yazidi region in Sinjar, with the YBS as its defence force.

“We want a Yazidi area, and we want the YBS to be the protector of it,” Said says. “What we are seeing now with the YBS, it will be bigger than this. This is all we have, and they will be here to protect the Yazidi people and Sinjar in the future. We want an army to protect this land and our religion.”

According to Thomas Schmidinger, a professor at the University of Vienna, the movement for an autonomous Yazidi region has gained traction in response to the ISIL crisis and in the wake of the Peshmerga’s abandonment of Sinjar last August.

“There are a lot of different lines of conflict within the Yazidi community about the question of an autonomous Yazidi region,” Schmidinger told Al Jazeera. “But what is obvious is that since August, many Yazidis consider themselves more distant to the Kurds, and would like to have an autonomous region, either within the [Kurdish Regional Government] or a separate entity within Iraq.”

The presence of the YBS is a step towards being able to defend the community, Schmidinger added – and a significant step towards autonomy. Habaabi says he would be willing to fight for this ideal.
“I was a student before, but I’m a fighter now,” Habaabi says. “I never imagined this, but I will stay a fighter as long as my people need me.”